When I first moved to Singapore I wanted to take a trip with my son to celebrate his birthday, This was back in 2007 and searching for a place not to far from Singapore I discovered this beautiful little Island called Nikoi.
The Island is located of the coast of the Island Bintan in Indonesia.

So to get to Nikoi we had to take the ferry to Bintan. At the immigration we where meet by the staff from the Island. A car was waiting for us and took us to another part of Bintan Island and from there we where transported in a small Speed Boat to the Island.

Arriving at the Island we had to get off the boat on the beach as the only pier was under construction and not suitable for dropping us off in a small Speed Boat. This made the feeling of being on an adventure more complete. With little information about the Island upfront, we where both exited how this weekend would be. 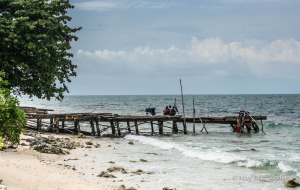 On the beach we where meet by the staff for a welcome drink and then shown to our Chalet that would be our home for the weekend. The Chalets are mostly built from old washed-up wood. The Chalets are open with no glass and being right at the beach you fall asleep to the soft sound of the waves.

At the time we where there 6 Chalets had been completed and new one where under construction. The Chalets is built to have natural ventilation and with no air condition installed. Mosquito net are installed above the bed and you really feel like being in a tropical paradise.

Arriving late and just in time for dinner we where introduced to the other visitor at the Island as everyone where seated at the long table for dinner. As the Island was newly opened the only visitors was another group of 5 people and the 2 of us. Then another 2 persons where expected to arrive the next day.

Our plan for the Saturday was to explore the Island and as it is a small Island, It did not take us long. To walk around the Island took us around 30 min. Walking around the Island we got to walk through the mangroves and we ended back up where they where building the swimming pool close to the Chalets. Most of what you can do on the island is water sports, relax in the sun or play games as there where no Internet and no TV. They also have some climbing on a big rock on the island for the one interested in that.

We went to the beach and spent some time there and tried out the kayak. Our plan was to try to paddle out to the rock looking like and Ipad, but dark clouds was getting closer and the waves got bigger and a tropical storm was about to hit the Island. 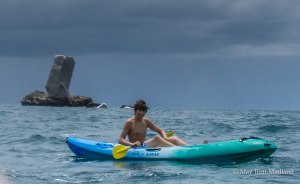 It started to rain heavy with thunder and lightning so we went back to our chalet to relax before dinner.  During dinner it was still raining heavy with thunder and lightning and suddenly the lightening stroke and hit the Island Generator. It felt like something strong hit the ground and the light was shut down. The feeling of sitting in the open air just covered with a roof above us with no walls and feeling the forces of the nature was a strange feeling and a bit scary as we where very close to where the lightning stroke. I think we where all in a kind of shock after this and kept talking about how close it was so the dinner ended up a bit different then it started. The rain stopped and the weather changed. The Generator was fixed and electricity came back on.

The staff had noticed it was Aleksander’s birthday as we had to give a copy of our passport on arrival, so they surprised him with a cake and the evening was celebrated with Cake & Drinks. 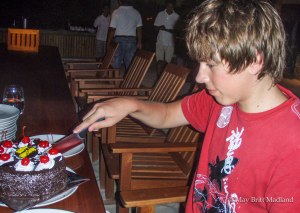 As in this tropical climate you never know when the rain will come and and when it comes it comes fast with heavy rain so just before we where to take the boat back the rain started again. This time without the thunder and lightning and lucky for us as we where going to spend about and hour in a small speed boat to get back to Bintan.

Even with the tropical storm hitting the Island with the lightning cutting the electricity the weekend had been fantastic and I was planning to return to this Island at a later time and so I did in 2011.

This time It was not so easy to book a stay at the Island as it had become more known to people and special to people living or visiting Singapore, so I was lucky and managed to book a stay for a weekend and here I was back on this beautiful Tropical Island.

The Island had not changed much but had a few upgrades, so the small speed boat was changed out to a larger one with cover. A new jetty had been built, the rest of the Chalets was completed so now there is a total of 15 Chalets that has different sizes and the swimming pool had been completed.

A Lizard is out for a walk and was trying to take a swim in the pool.

The sunset is still amazing and they still make the fire at the beach in the evening. 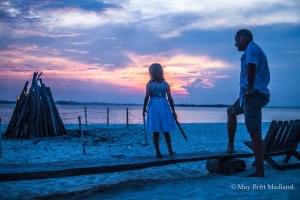 The Island is not the place if you need to be connected to Internet or need a TV, but if you are looking for some days just feeling the peace and quiet this is the perfect place. It is still a tropical temptation even do with a little less Robinson Crusoe touch to it.

To book your stay at Nikoi Island you can log in to: http://www.nikoi.com